Lori Beth Denberg (born on February 2, 1976 in Northridge, California) is an American actress & comedian who was a cast member of All That from 1994 to 1998. She returned in the 100th episode special, the tenth anniversary special, and in Season 11.

She first began acting in community theater and school plays at the age of six. She also starred on the WB network sitcom The Steve Harvey Show, appeared in the film Good Burger and was a regular panelist on the Nickelodeon game show Figure It Out (where she was known for guessing the correct answer before the contestant could win the grand prize).

Lori Beth reunited with her All That cast members for the 2011 Comikaze Expo where she joked that she was now "living out her old age."

Her other credits include appearing in the films "Dodgeball: A True Underdog Story" and "18 Fingers of Death." In 2017, she starred as herself on the Pop Network television series "Hollywood Darlings." 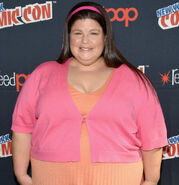 Lori Beth on "Figure It Out"
Add a photo to this gallery
Retrieved from "https://allthat.fandom.com/wiki/Lori_Beth_Denberg?oldid=6537"
Community content is available under CC-BY-SA unless otherwise noted.