On April 16, 1994, Nickelodeon aired a sneak peek of the show All That, leading up to its New Year's Eve premiere. This pilot is notable because unlike other season 1 episodes (or any other missing episodes in general), it supposedly hasn't aired since the '90s and was never aired again.

Some notable differences are the cold open taking place on a playground instead of the usual Green Room, and intro. As the pilot it introduces several staple characters of the series, such as Miss Fingerly, Ear Boy, H. Ross Perot and Baggin' Saggin' Barry. Notably, Pizza Face is not played by Kel in the Ear Boy sketch, as Kel played one of the earlier bullies in the same sketch, their are also several bumpers with Sinbad and other celebrities dispersed throughout the episode. 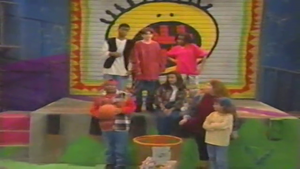 Retrieved from "https://allthat.fandom.com/wiki/Episode_0101:_TLC/Phil_Moore?oldid=5194"
Community content is available under CC-BY-SA unless otherwise noted.