Bad Bunny (b. 1994) is the stage name of Puerto Rican singer and rapper Benito Antonio Martínez Ocasio, whose music is defined as Latin trap and reggaeton.

He performed his song "Vete" on episode 1120. He later reappeared in episode 1126, being interviewed about DJ Salad's influence on his music career. 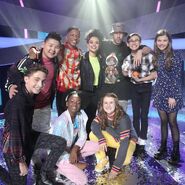 Add a photo to this gallery
Retrieved from "https://allthat.fandom.com/wiki/Bad_Bunny?oldid=6225"
Community content is available under CC-BY-SA unless otherwise noted.